The Three Weeks is a period of mourning that occurs in the summer every year leading up to Tisha B’Av. We mourn the destruction of the Holy Temple and the exile of the Jews from Israel. Observing and relearning the details of these events helps us to recognize the weaknesses which brought about these tragic happenings. We do this through the process of “teshuva,” which means self-reflection with a commitment to become better. With “teshuva,” everyone has the power to turn tragedy into joy. The Talmud actually states that after the rebuilding of the Holy Temple, these days will be altered as weeks of happiness and celebration.

History has a tendency to repeat itself, if we don’t learn from it. That’s why it’s so important to shed light and observe even the most tragic times. With that said, here are some observances and more information regarding Tisha B’Av that the team at JCHC has put together.

What Happened on Tisha B’Av?

Observances During The 3 Weeks and Tisha B’Av

There are many mourning-related customs and observances that are followed for the entire three-week period leading up to Tisha B’Av. Some examples are no haircuts, no new clothing purchases, no listening to music and no Jewish weddings are to be held during this time.

The afternoon before Tisha B’Av, we are to eat a full meal to prepare for the fast. When the afternoon concludes, the Seudah Hamaf-seket is eaten. This is a meal that contains bread, water, and a hard-boiled egg only. The hard-boiled egg represents two major elements. The roundness of the egg reminds us of the precious circle of life. The second element is that the egg is the only food that becomes harder the more it is cooked – i.e. a true  symbol of the Jews’ ability to rise over the ashes, no matter what life throws our way.

If you’d like to know more about Jewish culture, or about how we are observing the Three Weeks leading up to Tisha B’Av, please contact the team at JCHC today. At our Lester Senior Living community, we read the Torah, hold Maariv Services and even offer university level classes about Jewish history and culture.

To learn more about the Jewish teachings offered at our assisted living community in Morris County, NJ, please visit our website at: https://jchcorp.org/assisted-living-morris-county-nj/ 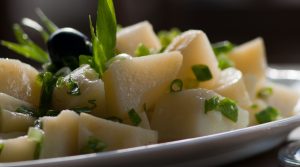 What Does It Mean To Offer Care “In The Jewish Tradition?”